This year’s second edition of ‘MUSIC SHARE #98′ was broadcast on 28 February.
It was recorded at Audio-Technica‘s ASTRO STUDIO, which is often visited by famous musicians.

The second performer in this year is up-and-coming sound designer and musician Kimitoshi Sato“.

Kimitoshi is a musician with a production style that combines field recordings collected in various parts of the world with electronic sounds to produce music for various public spaces, commercial facilities, office soundscape design and web content, as well as sound production for commercials, radio programmes, fashion shows, performing arts and dance companies.

You have also performed at MUSIC SHARE once as Mother Tereco.

Such is the versatility of Kimitoshi Sato that he performed a solo live set for this edition of MUSIC SHARE.

On the day of filming, Kimitoshi entered Audio-Technica’s Astro Studio, where the recording took place, and first set up the equipment and conducted a sound check.
Compared to Mother Tereco, where the set was like a fortress surrounded by high piles of modular synths and a lot of equipment, the set-up seemed somewhat simpler.
Even so, the 16-channel analogue/digital mixer ‘Korg MW-1608‘ was brought in by Kimitoshi, who is also active as a mix/mastering engineer, and his commitment to sound quality was clearly evident.

In fact, I was so impressed by Mother Tereco’s MUSIC SHARE live performance that I once offered to perform at MUTEK.JP at the National Museum of Emerging Science and Innovation, which I was involved in at the time, and booked them. This is probably the third time I’ve met Kimitoshi on location, as he also performed at RAINBOW DISCO CLUB with an open-reel ensemble a few years before that.

We didn’t particularly touch on those old stories on the set, but this was the first time I had the opportunity to have a relaxed chat with Kimitoshi. I imagined from his atmosphere that he would be a bit more geeky and difficult, but he was very friendly and polite, and a very charming person. While we were having this conversation, the equipment and cables were being set up smoothly for the sound check.

When the sound check began, the balance of each individual sound was carefully checked while the performance music was played.
From the sound check stage, I was already fascinated by the beautifully delicate sound grains and large scale soundscape that Kimitoshi spun out.

Mother Tereco’s live show had a somewhat nostalgic feel, with the melodies woven by Sato-san and Namba-san resonating comfortably, but this solo set gave a completely different impression.

The sound was somewhat decadent, industrial and hard, with nature sounds, probably collected from field recordings, mixed in. Delicate sound production and calculated engineering. The soundstage has a sense of scale and worldview like that of a sci-fi film. There was wonderful music there that words cannot do justice to.

No further explanation is needed.

Please experience the wonderful live set by Kimitoshi Sato in the MUSIC SHARE video.
(If possible, we recommend listening to it in a better sound environment!)

And once again, Oyaide NEO provided solid support for the wiring around the equipment.
d+ classB Seriese was installed at the input to the KORG mixer that He brought. It contributes to the open sound and good sound extraction. d+ cables, which are generously connected, also look really nice and goofy.
In addition, PA-02 XLR cables are used for the mixer’s main outputs, which smoothly and losslessly deliver the music to the PA’s home.

And for the most important mixer mains power supply, OYAIDE VONDITA-X power cable was used.
The red colour with a strong presence attracts the eye, but it does not bring about a flashy change, but enhances the sound image by raising the resolution and improving the sense of range from the main source and adding thickness from the mid-range to the low range.
The combination of MTB-6II + TUNAMI GPX-R V2 and OCB-1 AX are used to supply power to the effectors and PC, and like the VONDITA-X, the resolution is raised and the S/N ratio is improved to facilitate more detailed expression. 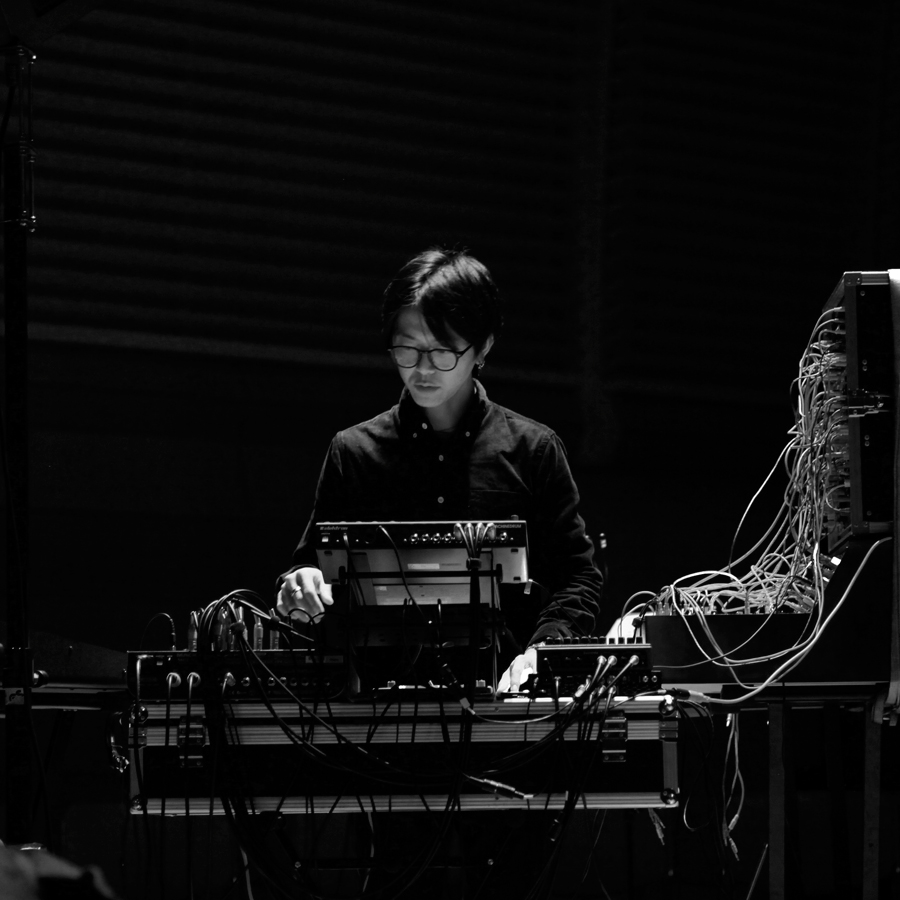 佐藤公俊(Kimitoshi Sato)
Musician and sound designer.
He produces music combining field recorded material and electronic sounds collected from all over the world.
His work utilises his skills in a wide range of areas, including soundscape design for various public spaces, commercial facilities and offices, music production for web content, sound production for advertising music and radio programmes, and theatrical accompaniment for fashion shows, performing arts and dance companies.
He also contributes to music magazines and provides live support for artists, utilising his expertise as a mix and mastering engineer and his knowledge of hardware.
▶Official ▶Twitter ▶Instagram ▶Facebook