Superbooth is a synthesizer convention that started in 2016, focusing on modular synths.

Today, it is a conference that attracts synth manufacturers from all over the world as well as, and attracts many creators, artists, and musicians with its beginning going back to twenty years ago.

Originally, a handful of friends and like-minded geeks created a special place for synthesizer enthusiasts in a space that was part of Musikmesse, a large conference held in Frankfurt, Germany.

This shared space was home to a small, passionate group of makers of exotic hardware and electronic music equipment. That was (the original) Superbooth.

The purpose of Superbooth was originally to provide small startup brands with a chance to raise money to exhibit at big events like Musikmesse.

But more than that, it was also about just making music together in that shared space. 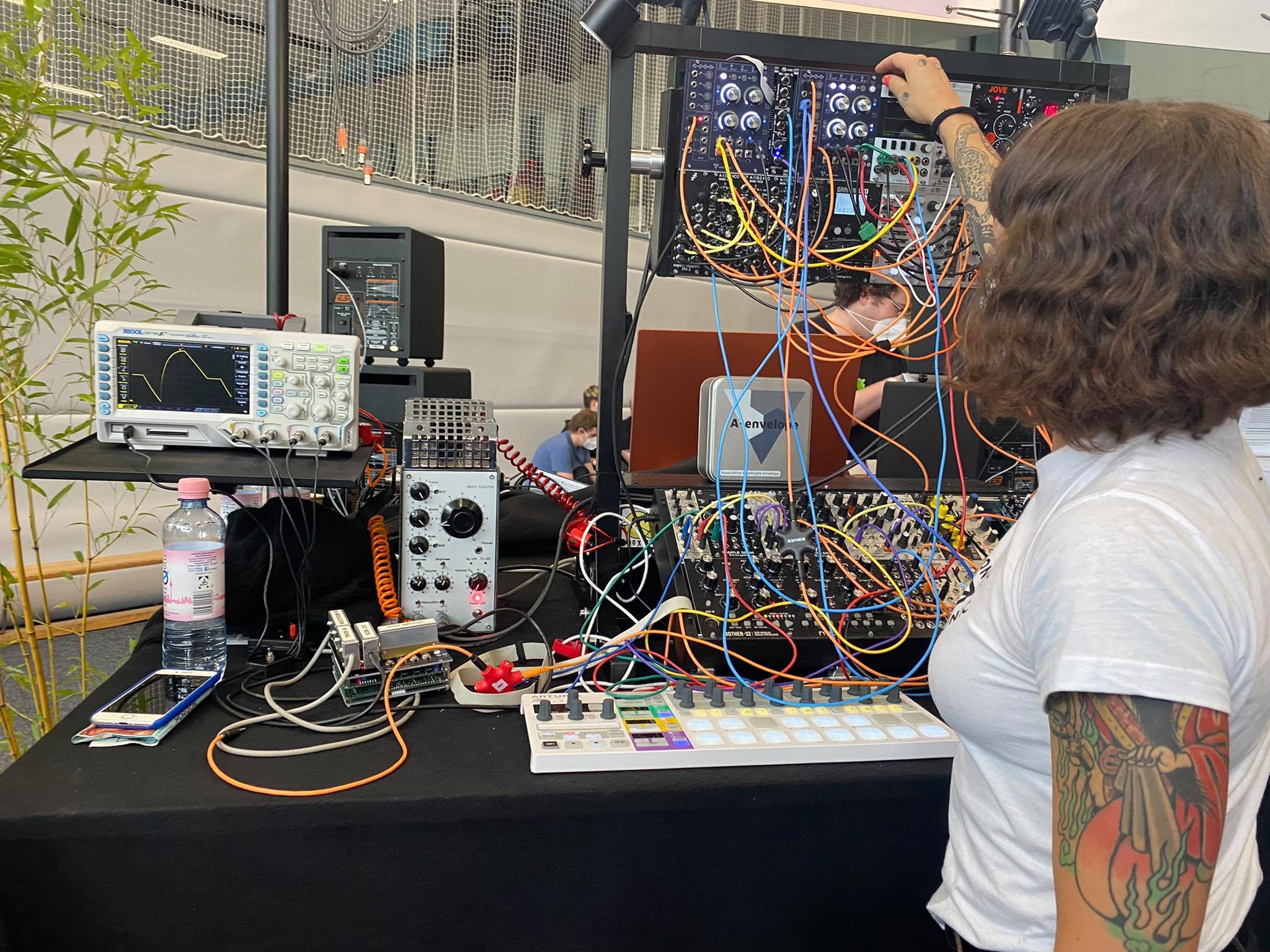 With such an attitude, in 2015 Herr Schneider, one of the founders of Superbooth, decided to take Superbooth from Frankfurt to Berlin and change it to a new format

From this beginning, Superbooth has gradually grown into a large conference with more and more attention as the years go by.

Since 2017, the event has been held at a very special venue, FEZ-Berlin which has moved to a new concept, a venue surrounded by green nature and a stage perfect for the festival program. 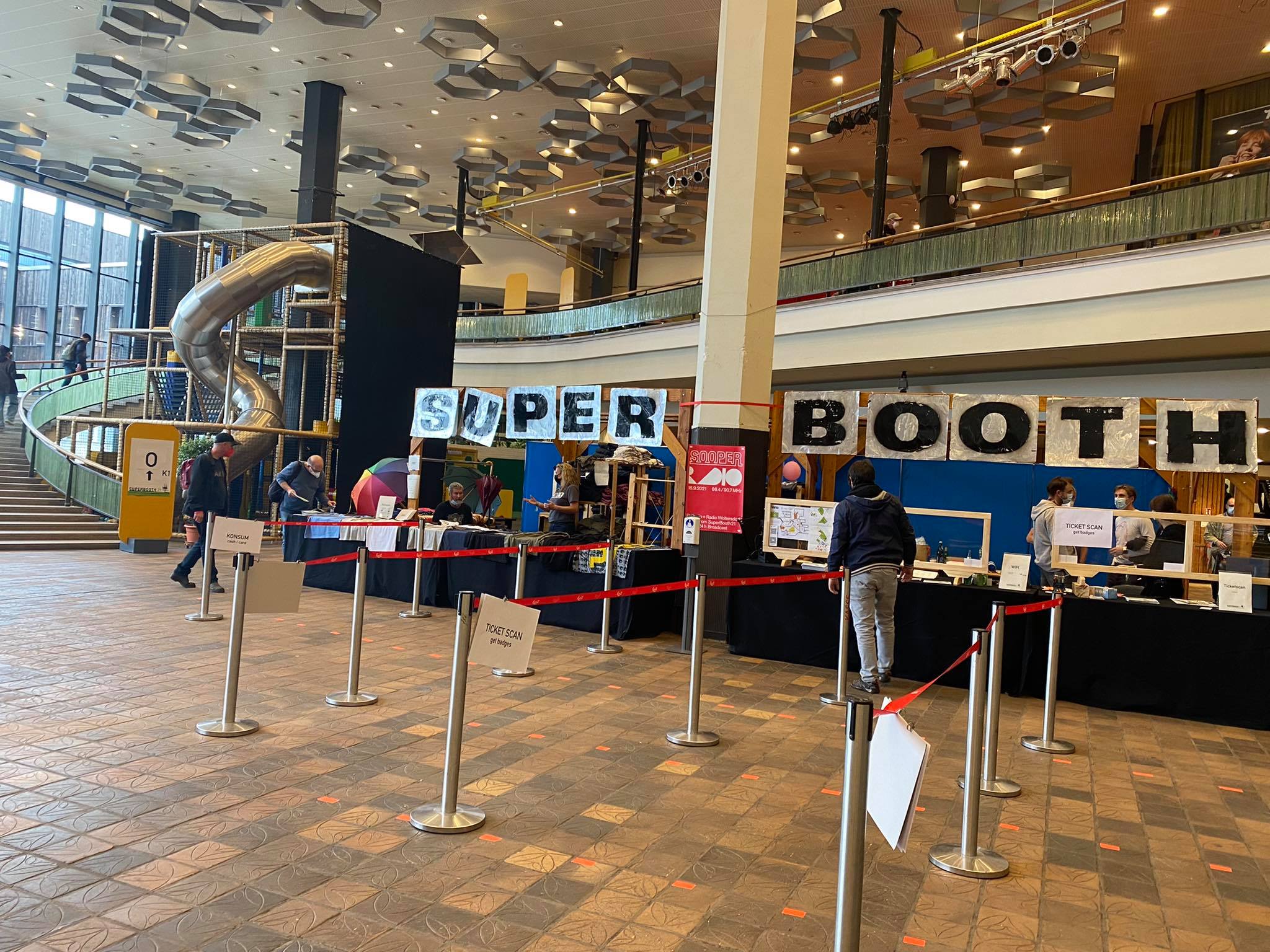 The number of participating manufacturers has grown rapidly, reaching an overwhelming number of 230 exhibitors in 2019.

A major five-yearly show, Superbooth Berlin, was planned for 2020, but the organizer forced to change their plans due to the worldwide pandemic.

The first online event, Superbooth 20 Home Edition, held in April 2020, was a success and brought the name Superbooth to the attention of even more enthusiasts around the world.

Superbooth used to be held in May every year, but this year it was postponed to September due to the pandemic, but it managed to be held without incident, and we at Oyaide were able to participate in the event.

This is the world’s largest synthesizer convention , held annually in Berlin, Germany.

This year, Over 131 brands and manufactures participate with their own booths.

I attended Superbooth once before, about five years ago, but I had a slightly different impression of the event as it was much bigger than the last time.

This year, the booths were farther apart from each other, and tents were set up outside the booths to follow the Corona restriction.

Food and drink stalls were also plentiful, and I even found a Japanese okonomiyaki restaurant.

As I visited the booths of various brands and manufacturers, I was most impressed by the Moog source area.

As I entered the large tent with its circus-like appearance, I found myself in a fantastic, treasure chest-like world.

The beautiful harmonies of the many synthesizers displayed here and there echoed, and the lighting and decorations were overwhelming.

The various types of synthesizers on display were all available for visitors to touch, play, and try out.

The creators were actually playing freely, having sessions, and enjoying the music.

It was a scene filled with the attitude of Superbooth.

There was also a Moog gacha, where you could win Moog goods, which really tickled the fancy of both adults and children. 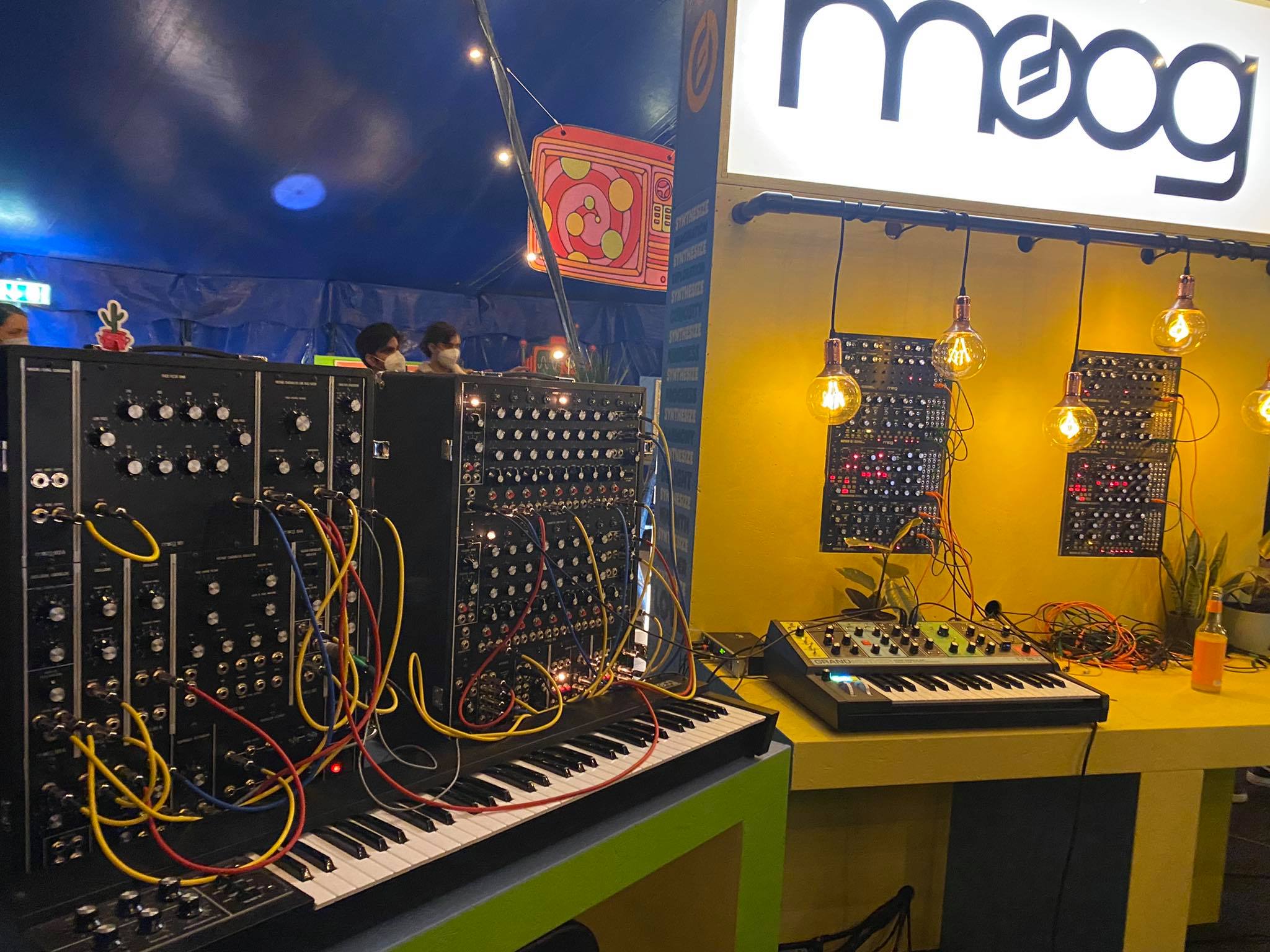 Elsewhere, the booth of Erica Synths, a Latvian synth manufacturer, had attracted many visitors as well.

At the Waldorf Music booth, there was a long line of people waiting to try out their latest product, the Waldorf M Wave Table synthesizer, which I visited with artist Bloody Mary.

Superbooth is also a great place to check out the latest and pre-release equipment from various brands and manufacturers.

The conference is also considered to be a great opportunity to show off new products and see how users react to them.

The trend this year was to see a lot of new hardware synths, soft synths, and even DAWs.

Japanese companies such as KORG and ZOOM also had stalls. 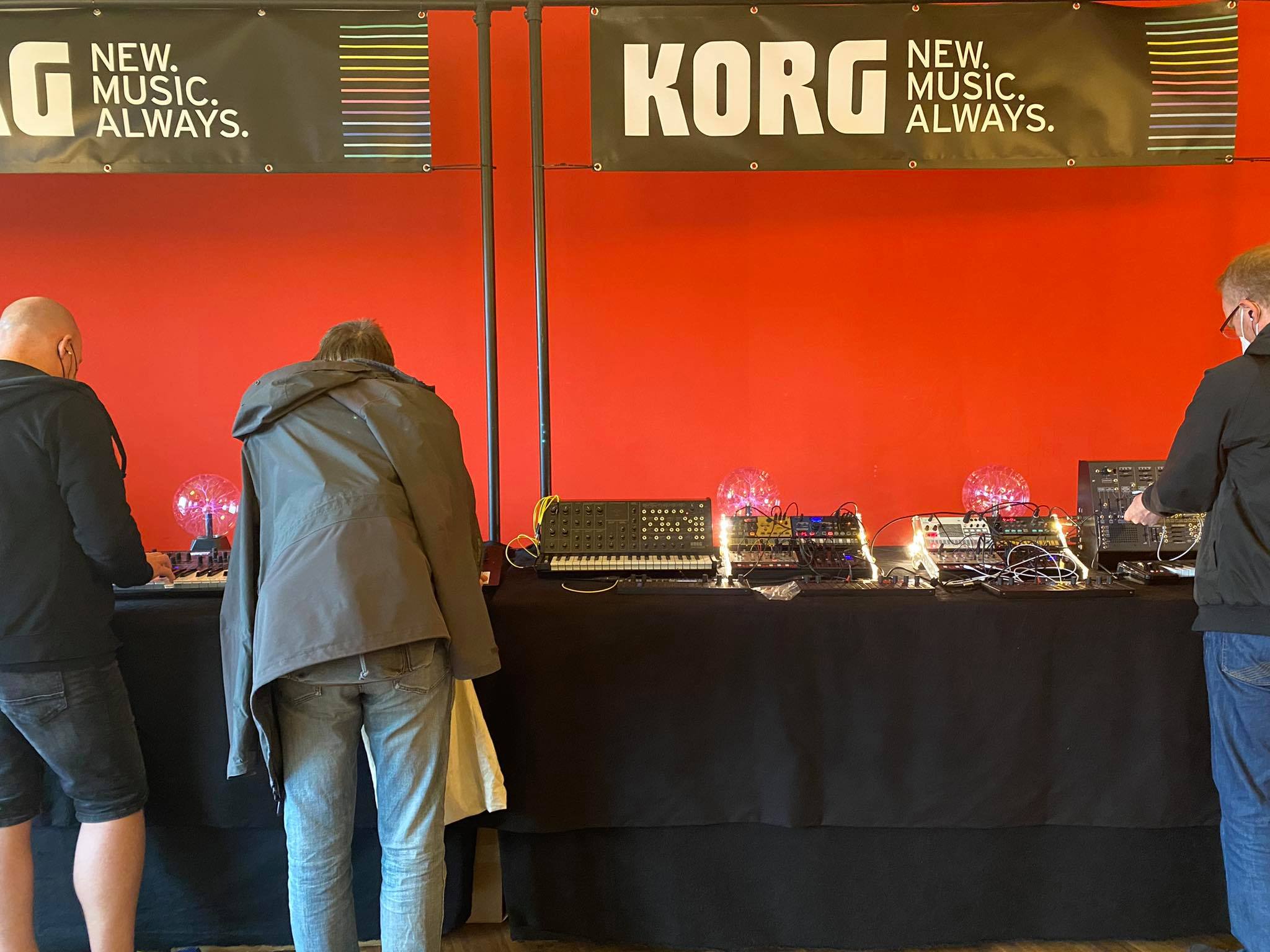 There were also a variety of live shows and workshops by artists.

On the stage set up by the lake, there were live performances by artists every day.

We enjoyed the live performances of Bloody Mary, St. Raumen, JakoJako, and other artists. 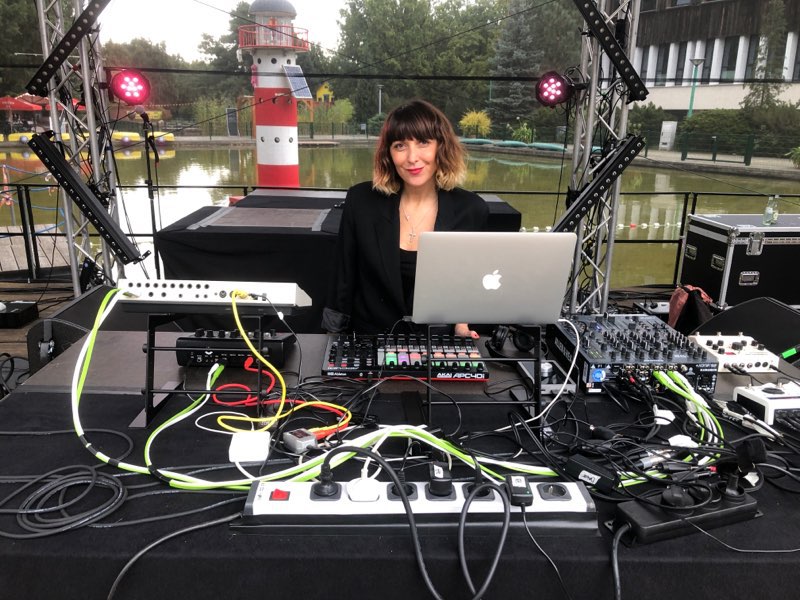 St Raumen’s live performance was unique in its industrial sound with a rock twist.

It was a very cool and sophisticated performance that drew the audience in.

At the APD Dynasonic and Decksaver booths, the PAT team, the German distributor for Oyaide NEO, welcomed us with a display of d+ cables.

Dynasonic has been a leader in mixing technology for more than 50 years, and the latest mixers on display had a number of d+ cables connected to them, drawing many visitors to the booth to look at the cables as well as the mixers.

In addition, PAT staff members Steffen and Matthias showed off their equipment in an impromptu jam session.

I was very impressed with how everyone at Superbooth, not only the general public but also the people involved and the staff, really enjoyed the event.

Oyaide NEO’s d+ cables were also very active at the booth of RME, a world-renowned brand of audio interface, and at the booth of Stimming, an artist, who had a new compressor installed in his new product and many other equipment on display. 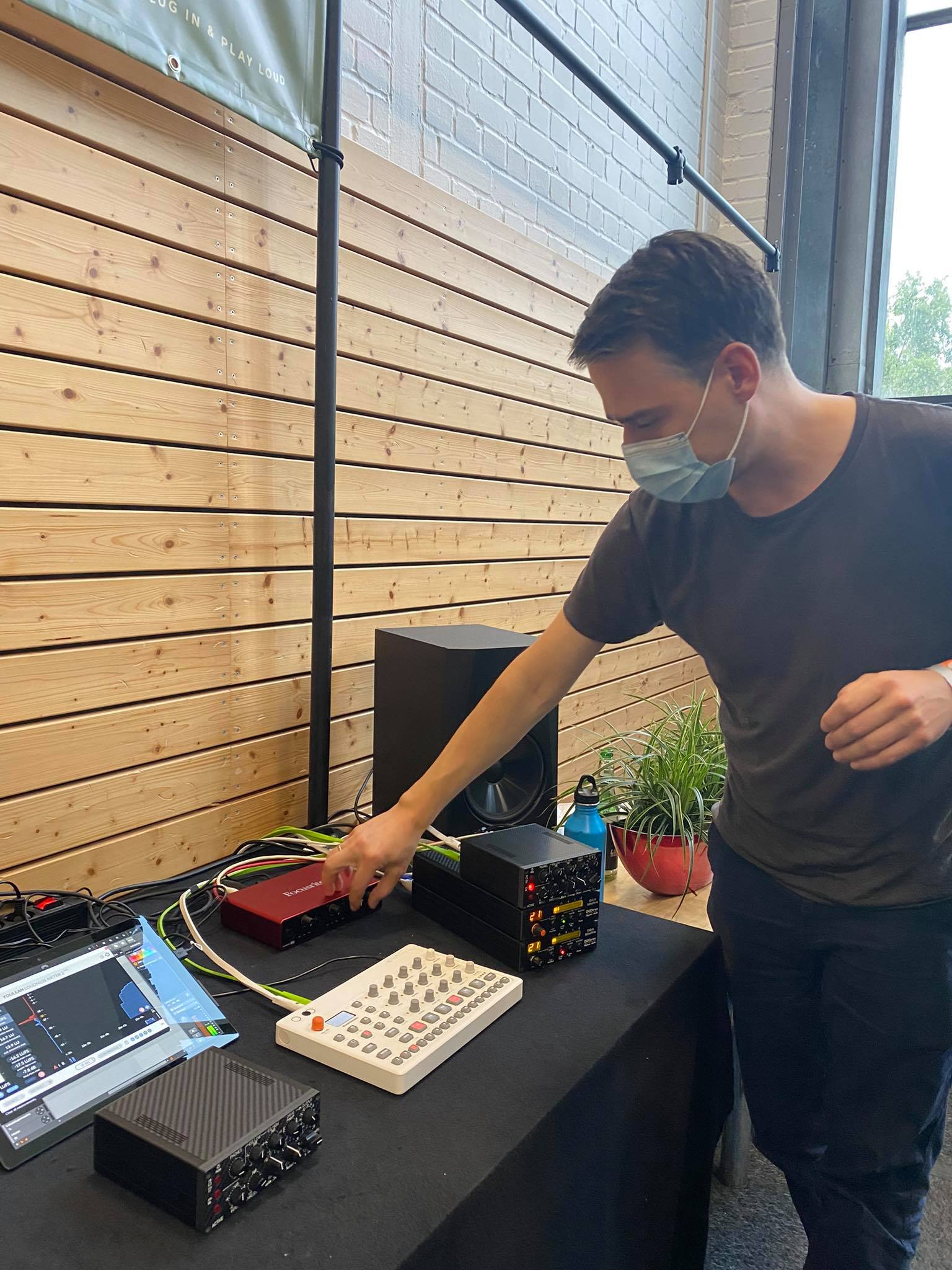 During the convention, strangers started to improvise and jam with each other, or immersed themselves in their own world while playing with modular synths, and everywhere we saw people enjoying themselves freely and sincerely in their own way. It was a very enjoyable and moving experience.

Even though the conference has become one of the most successful synthesizer convantion in the world, we were able to feel that they never forgot their fundamental concepts and attitudes.

In the evening, a party was held in the forest, produced by Tresor, a club that is an essential part of Berlin’s history of culture and integration.

Superbooth was a really great and fulfilling event , and the one day we attended was not enough to enjoy it all.