【It depends on the equipment you are using, creating the environment by cables you are using it in, and the sound you want to produce.】

OY : Now let’s talk about Oyaide. We`re interviewing you right now, but you also came to Oyaide’s headquarters the other day, and we talked a lot about cables.
It all started when machìna sent us an email to Oyaide’s website, and we started talking.
Could you tell us how you came to know about Oyaide in the first place?

machìna : I found out about Oyaide a long time ago.
When I first came to Japan, I went to a music store and asked about cables, and the clerk recommended Oyaide.
He said, “They’re a little expensive, but they’ll definitely sound good.

OY : Which cable did you buy first?
machìna : I think it was the QAC-222 cable.
I remember the sound, but I also remember that it was very solidly made and gave me a sense of security.
The best thing about cables used in live performances is that they are safe and trouble-free.
I also bought another USB cable soon after that. 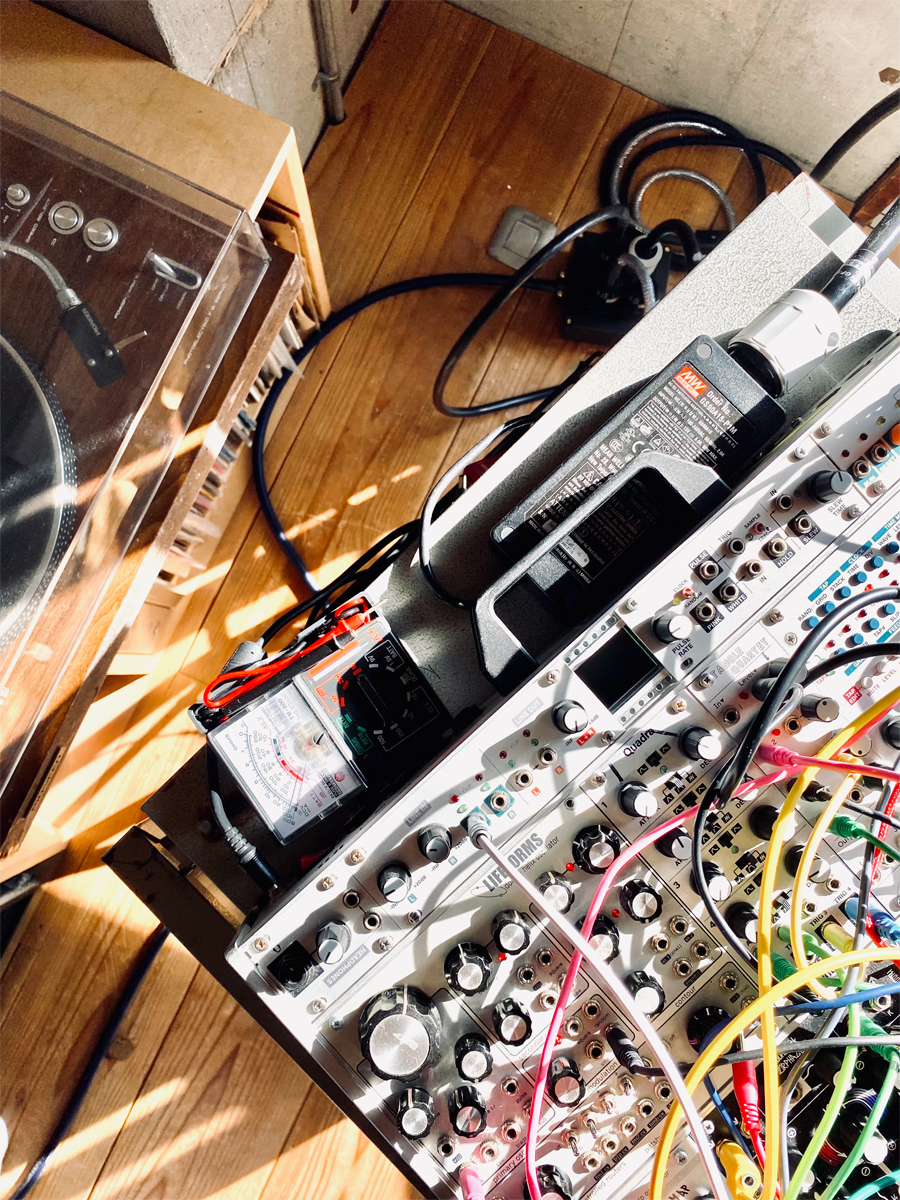 OY : Why did you decide to change the cable in the first place?
machìna : It was because I was thinking about what I needed to do to convey the sound I had created in a “pure” way.
I’ve always thought that cables are very important parts in electronic music, as they transmit electricity and signals.
I have been concerned about cables and power supplies for a long time.My studio is also a place where people live, so when I use electrical appliances or LEDs, I get noise, and I have had many problems recording. I’ve had many problems.
In order to prevent this from happening, I knew I had to make sure the taps and cables around the power supply were in order.
I did a lot of research and found out that Oyaide’s power cables and power strips have a very good reputation for noise shielding, and I was very interested in them.
I was really curious about them.

OY : Thank you very much. So that’s how you contacted me.
After that, we met in person, and tried out various Oyaide power cables.
How did you feel after trying them out?
machìna : I was surprised at how much better it was.
I have used expensive line cables in the past and experienced an improvement in sound quality, but this was the first time that I had experienced such a difference in sound quality with power cables.

OY : So, machìna, could you tell us how you used the cables and what you thought of them?
machìna : In my home studio, I first used modular power cables with normal cables.
I played it to a lot of people, and checked the sine, sawtooth, and square waves, and compared how they changed after I replaced the power cable. 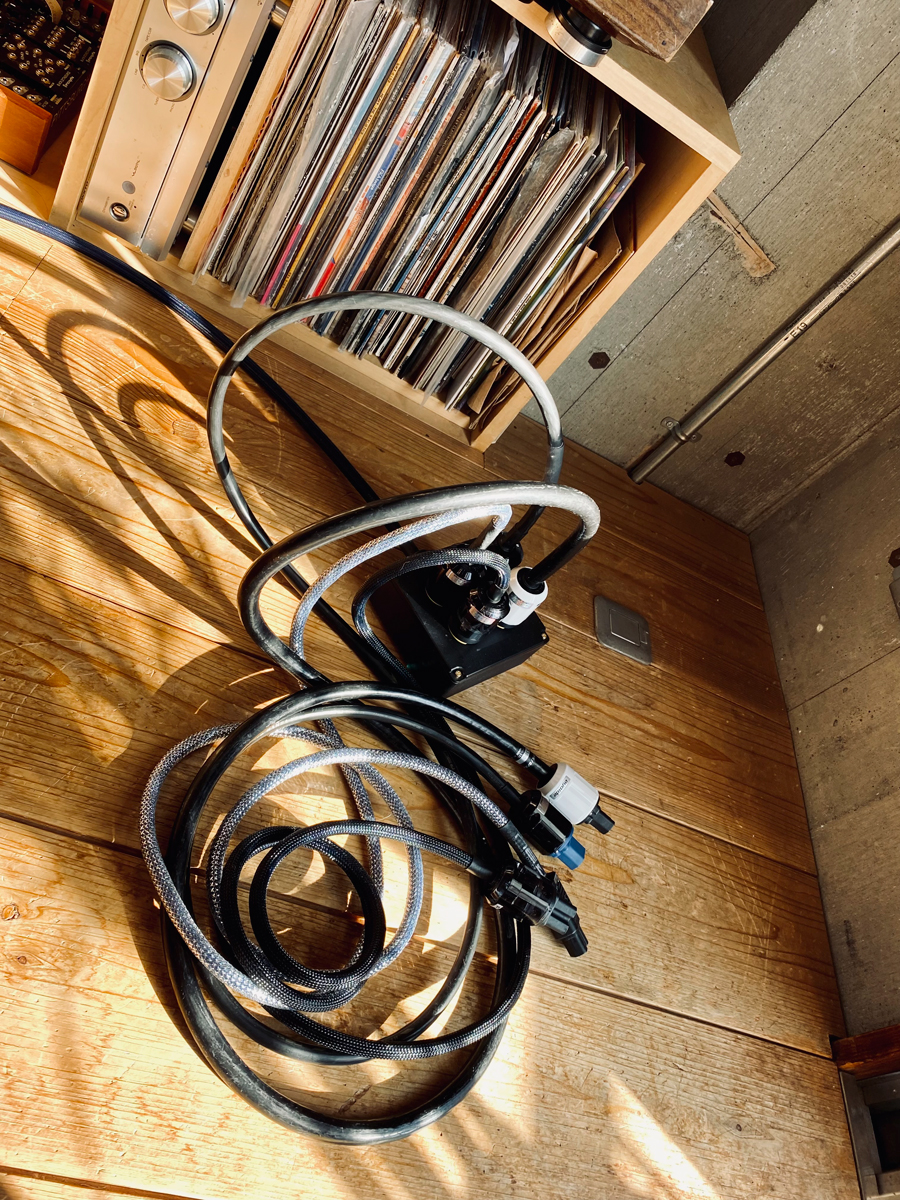 machìna : I found the effect very interesting.
L/i50 G5 gave a little boost to the bass.
L/i50HBE was more restrained and calm.
I tried various things, the best balance for me, I felt comfortable with the TUNAMI GPX-R.

OY : You’re right, the TUNAMI GPX-R might sound a little too low and toe-tapping for WOMB.
machina : Yes, that’s true.
If you’re playing more ambient or electronic music, the L/i50HBE is better for conveying the sound you want.
I thought that I would be able to use the L/i50HBE to convey the sound I wanted more.I’m very happy that I can actually do that using Oyaide’s cables.

OY : In fact, you’ve actually put into practice what we always secretly hoped musicians would use in this way, and realised it yourself!
It’s great that you’re able to adapt the cables depending on the environment, and that you can find the right ones for the sound you want to produce.
machina : No, no, no, thanks to you, I was given the opportunity to try various things.
Also, I was very surprised by the purple microphone cable that you recommended along with the power cable. 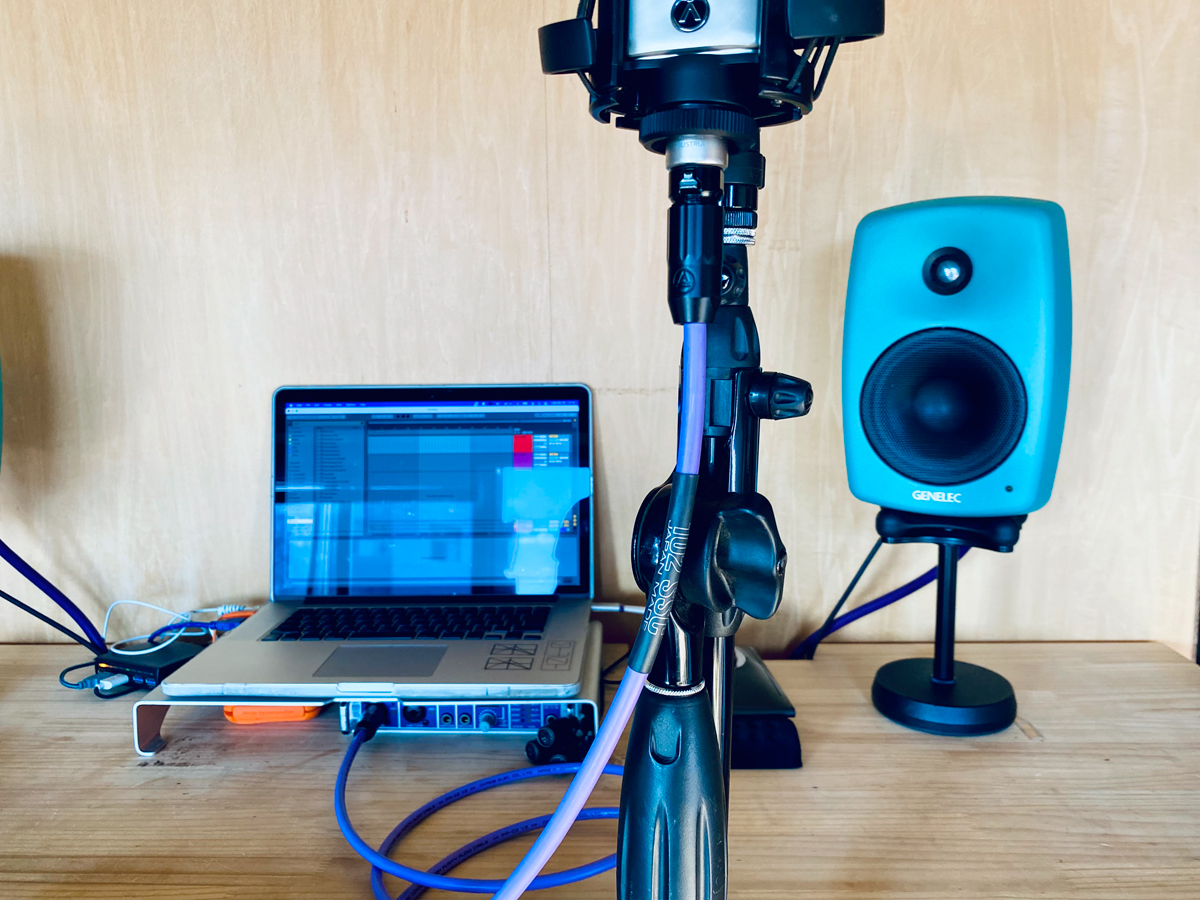 OY : PA-02 V2 XLR, right?
machìna : That mic cable was really good. I tried it out quite a few times for recording, and it didn’t make any apparent difference in the size of the waveforms, but I can’t describe it… it was as if I had switched to a very expensive amplifier, and my voice was more spacious and the resolution was much higher.
One more thing, the modular patch cable that you made for me.
It also sounded better in the same way and direction as the purple microphone cable.
For live performances, the combination of that purple mic cable, white patch cable, and TUNAMI became the strongest three-piece set.

OY : Thank you very much.
The white patch cable is actually a prototype cable that we haven’t commercialized yet. 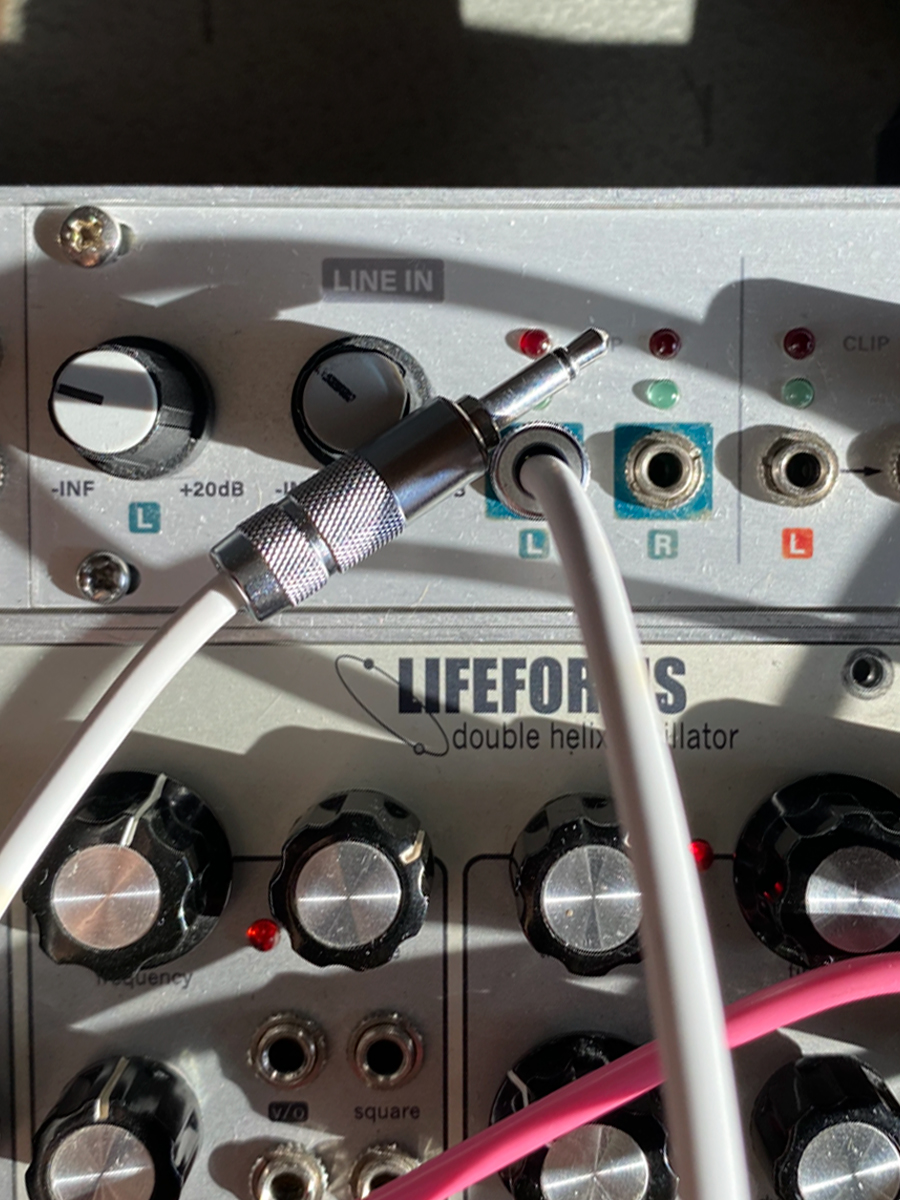 machìna : Modulators often use noisy sounds as a source, and I think it’s a waste that plug-ins and EQs can only express such noisy sounds in a wide range when transforming them into music.
I really like the way the cable makes the sound of the source spread out more three-dimensionally and in all directions, 360 degrees.

OY : That’s right.
That’s exactly what we are aiming for with that cable. It’s a sense of range and depth, and it expands the sound field.
It’s an image that reproduces the sound that you want to produce in a pure and better quality without adding any strange colors to the sound.
machìna : Of course, you can use it in the studio, but when you perform live, the sound will change depending on the environment, such as the venue and the sound system.
I thought it was great to have the peace of mind that the sound would be completely pure only to those who use it.

OY : That’s right. If it’s a cable, it won’t be too much of a burden to carry, and the quality of your playing will be more stable.
If we can contribute even a little bit to the users and the audiences who enjoy playing in this way, we as a manufacturer will be very happy.
Patch cables for modular are currently being prepared for the release in the spring of 2022.
We would be grateful if you could share your opinions with us again.
Actually, for the past few years, we’ve been receiving many requests from overseas to make patch cables for the Oyaide NEO and d+ series, and we’ve been preparing to meet those requests. We`ve been working on it.
machìna : I’d like to recommend the patch cables I tried to everyone! Please commercialize and release them!

OY : I heard that SUPERBOOTH will be held in Berlin this year in May, I hope I can introduce the patch cables to modular fans and artists all over the world. If possible, it would be great if you could come to Berlin with us and show us your performance.
machìna : Let’s go! 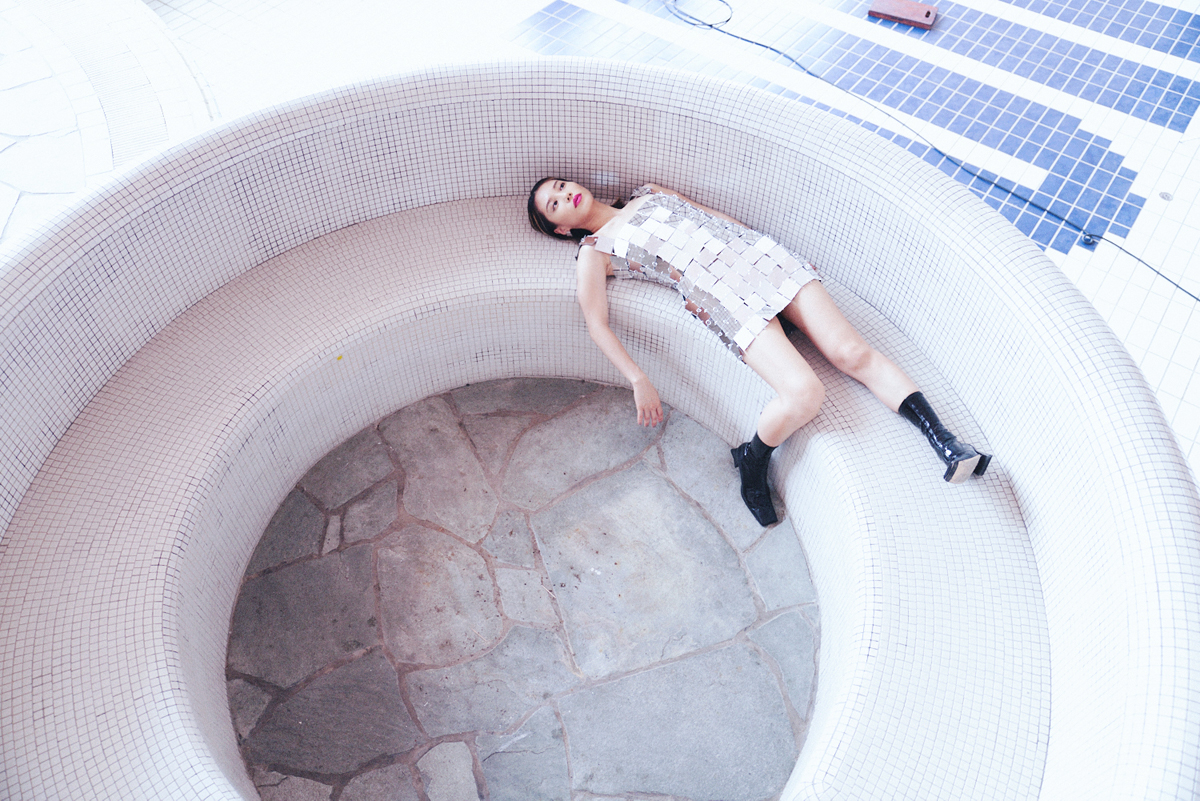 machìna is a Korean artist working and operating out of Tokyo. Her music is deeply personal and rooted in selfhood, and yet best experienced amidst the collective effervescence of a nightclub dance floor. The dichotomy is just one of the many seemingly contradictory elements that are resolved the more you listen, the more you learn about her.
Her compositional style is both thoughtful and playful, hinting at her love of jazz, which is also evidenced in her confident modular improvisations when she performs live. Her vocals are pronounced and note-perfect, forged in the regimented training she underwent during her time as a K-Pop artist. And her tracks transcend cultures and genres, much as she has done throughout her life. Every experience seems to be channelled into her music.
In recent years, she has expanded her activities into the world of media art as a regular performer in Japan at the digital art festival MUTEK, and in Korea, she performed her new album “Compass Point” live on a classic 4-channel system. She is scheduled to headline next year’s ELEKTRA Montreal.
Her unique style has also been featured in the fashion scene, including the opening live performance at the PRADA Miyashita Park in Shibuya, Tokyo, as well as appearing with Matthew Williams in the new NIKE global campaign scheduled for release in December 2021 and 2022. He has also appeared with Matthew Williams in the new NIKE global campaign to be released in December 2021 and 2022.
In parallel with the production of his third self-produced album “Compass Point” released in October this year, he participated in the popular song “Hawk” by the British electronic music duo Bicep over the summer.
Recently, she was asked by the record label Tresor to participate in a compilation album of legendary clubs in Berlin, and her constant expressive activities are still attracting attention from many scenes.
machina.link
NEW ALBUM「Compass Point」